SHE DID IT! STELLAR’S SECOND OFFSPRING EVER INSPECTED, RAFINJA OF NEW HORIZONS–top two photos–(OUT OF V.PR.ST RICOLA DTA) RECEIVES GOLD STATUS AT HER AHR INSPECTION AND CLASSIFICATION! SHE DID IT!! We knew Ricola’s first foal by Stellar was special from the moment she was born, and she continues to demonstrate how exceptional she is again and again, this time being awarded GOLD status with 81 points at her 2018 AHR Inspection and Classification! With 9s for type, head, hindquarter,and overall movement,and 8s for neck, hind legs, and correctness of movement, this mare wowed those who saw her! The judges were very complimentary of Raffy’s type, strong hindquarter, movement, impulsion from behind, and ability to “sit” and collect. Comments include: clear suspension and extension at trot and canter, strong impulsion from hindquarters and light, uphill, rolling canter, uphill build, athletic way of going, and obvious presence. 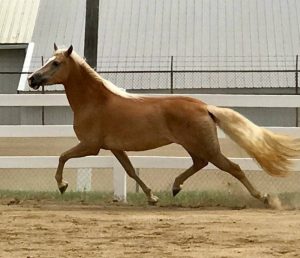 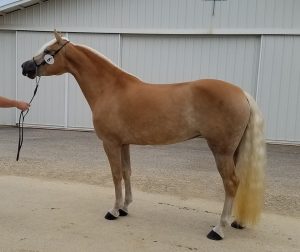